The Imperative of Fire Safe Testing!

I often hear people saying “Metal seated valves with graphite sealing don’t need to be fire safe tested, as all the components are fire resistant”.

To be honest, starting my career as a valve engineer, I was convinced, that this common understanding is true – until I did fire safe tests on my own for our Monoflange Series, many years ago. Even after this long period of time I remember very well, when we did the pre-tests. I looked very surprised, when the valve seat was leaking during the firing of the valve.

I was so sure to pass the test at the very first stage, as I shared the widely spread opinion mentioned above. I asked myself ‘What did I wrong’ and also ‘can so many people be wrong with stating this opinion’.

After redesigning the valve and passing the test successfully, I can safely say the following:

Many people think that the only problem in case of fire is that soft materials like elastomeric O-Rings and PTFE-seal rings burn away. But that’s only half the truth.

The bigger and more massive the valve body, the less you have the problem with the soft seat materials, as the heat of the flames need a certain time until it reaches the ball seats. But there is still another phenomenon you have to pay attention to: Different thermal expansion of metal parts.

Beside this, you also have to pay attention to the exposure of the different parts to the flames, especially the bolting. Therefore I want to give you some examples:

OS&Y = Outside screw & yoke.
This means, that the stem thread is outside of the bonnet and the gland flange is tightened down with two bolts. The advantage of this design is that the parts are protected from the process temperature and the media itself. But often an advantage also has a disadvantage. In case of a fire, the gland flange bolts are directly exposed to the flames.

As a consequence, the bolts are heated faster than the other valve parts and so also expand more. If now the gland  flange bolts are not springloaded, the valve tip can be lifted from the valve seat and as a consequence cause an internal leakage. 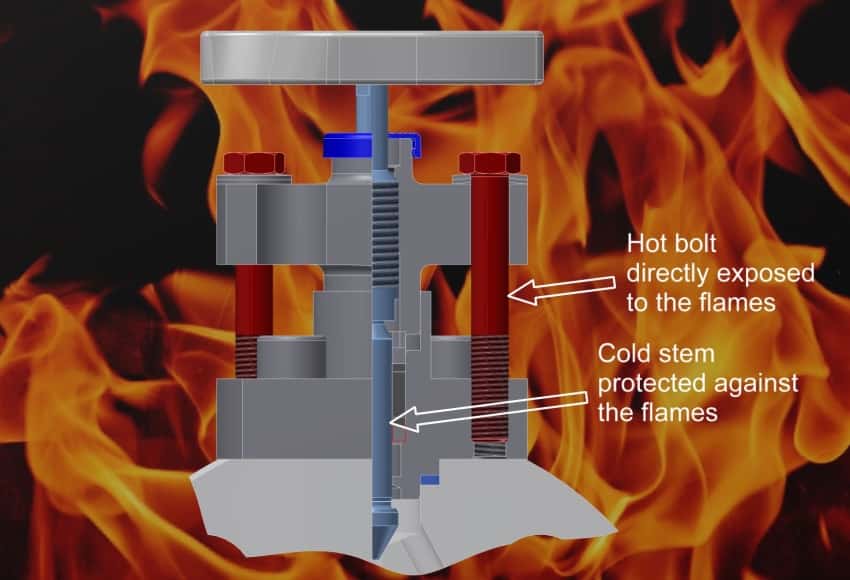 In my opinion, you cannot rely on the myth “metal seated + graphite = Fire Safe”. The topic “different thermal expansion of the valve components” must also be considered by choosing the correct design and material types. If you want to be sure to have a safe valve, ask for a fire safe test certificate.